The respiratory system is a very important system in the human body, as it is our source of oxygen which is basically your life-force.  So even minor respiratory blockages indicated by symptoms such as snoring, dry or wet cough, occasional or chronic difficulty breathing, chronic nasal congestion, etc., are reducing our energy levels and should be taken seriously. If ignored, more serious respiratory condtions such as asthma, bronchitis, respiratory allergies, chronic coughing and even respiratory infections can result.  The good news is that with minor changes in the diet and the correct herbal formulas and/or teas most respiratory condtions can be quickly managed and ultimately resolved.

"...week later I came off the other allergy medications."

"The recent rain and low clouds in Ventura put a great deal of mold in the air, a concentration of which I walked through a couple weeks ago and began having the worst allergy attack of my life. This went on for 4 days until I finally saw the doctor, who one day gave me an inhaler (which didn't help) . . .  Even on 3 different allergy medications and the steroid, I was still having an allergic reaction every few hours when the antihistamines would start to wear off. The doctor told me I would have to start wearing a mask outside - and to stop going outside whenever possible!  At our visit Khabir made me a strong tea and I was able to get some immediate relief, however even he could see my symptoms returned within an hour. It was decided that I would start a lung tonic and sip it throughout the day, along with an organic honey. Within a day I felt considerably better, and week later I came off the other allergy medications.  This lung tonic has made a huge difference in my life ... and I am committed to staying on it because it has brought such relief!  Thank you Khabir for taking the time to customize my mixes and pay attention my individual needs!" Sara Medina, Ventura, CA, March 2017 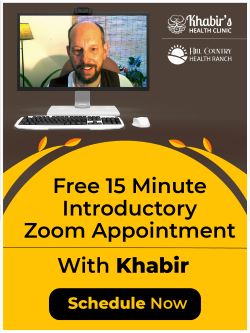